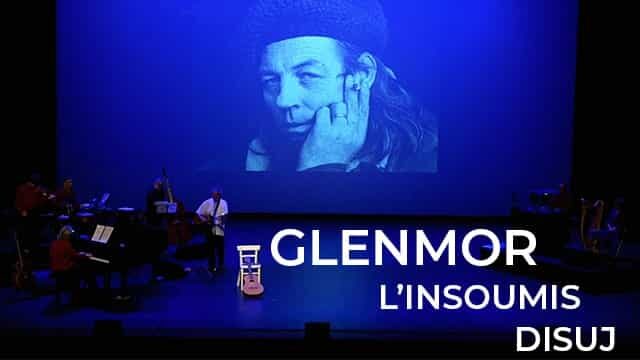 Glenmor, l’Insoumis is a tribute to Glenmor, Breton bard and consciousness raiser.

This sung drama is performed both by singers and musicians under the artistic direction of René Abjean and actors from Strollad ar Vro Bagan theatre company. Video images enhance the performance.

Musicians and singers perform a choice of songs showing that Glenmor was a sensitive poet committed both to Brittanny and the world.

The actors play lines by Glenmor, the Breton bard, by Xavier Grall, Alan Guel, Katell and several witnesses who have known the bard. Dialogues and monologues created from those texts let us see Glenmor living his everyday life, talking about various matters that were close to his heart, singing during tours, writing and thinking.

The play is not strictly chronological but stages the most significant events of his life, his encounters with Xavier Grall, Léo Ferré, Morvan Lebesque…

Glenmor, Émile Le Scanve for the civil registers, also called Milig ar Skañv in Breton, was a French-language and English-language singer-songwriter, writer and poet committed to defend Breton identity. He was born on 25 June 1931 in Maël-Carhaix and is dead on 18 June 1996 in Quimperlé.

Modern bard, major consciousness raiser for his generation and beyond, he originated the revival of Breton culture.

Strollad Ar Vro Bagan (« the Pays Pagan ») is a Breton-language professional theatre company created in 1965 and based in Plouguerneau, in the Léon area (North of Finistère) and leaded by Goulc’han Kervella, author and director.